So overall I’d have to say I was successful in meeting my goals for the weekend. I did well with getting enough water and worked out every day! The one thing I wasn't successful in was sleeping in, LOL

Saturday we got up early for a run. We ran from out house on Bay & Douglas, down Douglas to Dallas Rd and then along the water up towards the inner harbour and then back up Government. In total it was 9K and we did it in a total time of 1:24. We ran/walked 5 K and that took about 39 mins, and then we walked the remaining 4K. I'm pretty proud of myself for running 5K in 39 minutes. We'll have to see how I do on the next run. We also went to Moss St Market on Saturday and got some organic salad greens & tomatoes which we ate for the weekend. We also bought some "awesome sauce" from the market which is basically a really super hot sauce that you could either put on meats or maybe cook with eggs, or whatever you want really. We cooked it with some ground turkey and put it over a tossed salad - very yummy example of some good clean eating! 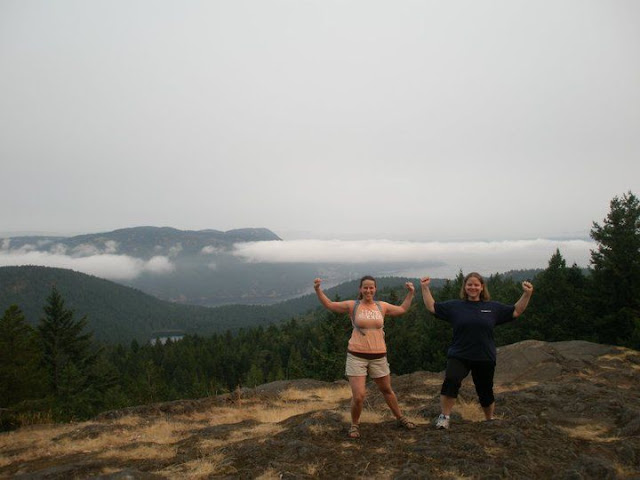 Sunday was Biggest Winners Day which resulted in a hike up Mt. Work. It took us just under an hour to get up, and a bit longer to get back down. Good workout though, burned about 1100 calories which is awesome!! We're thinking of maybe doing Finlayson on Thursday and see how that goes. Might as well get as much hiking time in as we can while the weather is nice. Sunday night we went out for Diana's birthday to the Local - down in the inner harbour. I'm a bit disappointed in myself for giving into the pressure to order a drink, but what's done is done. I definitely paid for it and felt sick to my stomach after drinking. I think I just need to avoid alcohol all together and not worry about what everyone else is thinking.

Today I went to outdoor bootcamp at McMinn park - by Cordova Bay - that involved 5 sets of hills, not sure if that was better/worse than Mt. Work but again another great workout. Following that was our BBQ at Willows Beach, it was a perfect day for it. Had some yummy chicken burgers and salad, played some Frisbee, soccer and badminton. I did splurge afterwards and had a small Beacon drive in ice cream. mmm mmm mmm - and even better when I have no regrets. Not the best thing for me, but what the hell - I think I deserve it.