And The Winner Is...

This past Sunday marked the end of our most recent Biggest Winners session. We had our Amazing Race workout with Black Team versus White Team. The concept was show up in either black or white and that would determine what team you were on. It was 12 black and 7 white but that just made it more competitive. 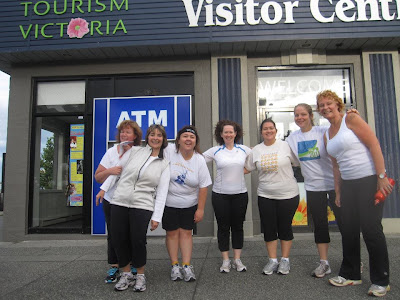 and the black team... 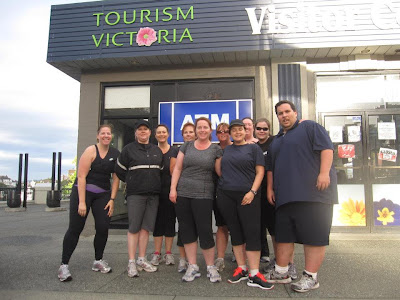 I have to say BW's Amazing Race is waaaaaaay better than the TV show - not that i've really watched it enough to be the best judge - but hey i'm a little biased. #1 we don't eliminate people #2 well us BWs are just STRONG and can do anything we put our minds too and #3 I really think that our hosts Michele Shorter & Carol Morrison are just plain better than Phil Keoghan. The race was full of plenty of challenges, carpools and even a yield. Lots of squats, lunges, and just hard work by everyone made it another awesome final workout. It was a close race right to the end but black beat us by a few seconds - way to go everyone!

Now onto the most exciting new from Sunday, the question everyone wanted to know, who was the Biggest Winner? Im so proud to say that Molly was crowned Biggest Winner for this session, not only did she lose a significant amount of weight in 12 weeks, she broke a long standing Biggest Winner record along with another lovely lady, Jana (stay tuned for that amazing story). Molly lost an incredible 48lbs and 53 inches in 12 weeks. This was Molly's first session with us and I remember her first day, she looked terrified, now she exudes confidence every time she is in the gym and is a shining example of dedication. Molly allowed me to interview her for this post and get some insight into how she did this. Reading her responses to my questions literally brought me to tears. I could see so much of how I felt/feel in what she writes. I think you will have the same response when you have to hear what she has to say.

But first here is Molly before... 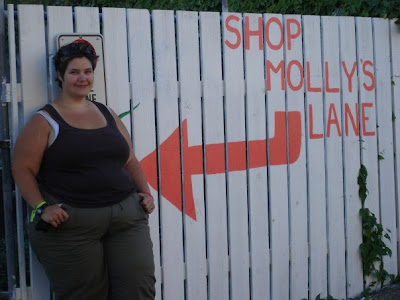 and Molly after....where'd you go?? Oh that's right you left it on the floor of BDHQ 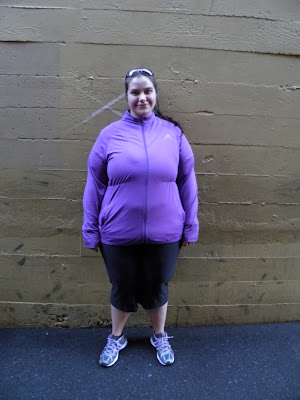 Now some insight into the lovely Molly..

How much weight have you lost to date?
To be honest, I’m not even sure! There was a long period of time where I didn’t even think about venturing near (let alone onto) a scale. The last time I weighed myself before joining BW was just over a two years ago. I had been watching a season of the Biggest Loser (sitting on the couch eating ice cream, most likely) and wondered how I stacked up. I knew I was the heaviest I had ever been, and feared that I had probably tipped over the 300lb mark. Needless to say, I was stunned when the scale read 386.5lbs. So, from that mark, I’m down 95.9lbs. Which, wow, I didn’t realize until right now! I started this past session of the Biggest Winner at 338.8lbs and am now at 290.6, so 48lbs of that 95 has come in the last three months.

Why did you start?
I started because I made the mistake of telling one of my close friends about BW and BDHQ and she forced the issue! It sounds silly, but it’s actually true. I saw an ad for BW and casually mentioned it in conversation to both her and my mother. Little did I know, that was the beginning of my journey. All of a sudden I had a message on my phone from Michele Shorter of BDHQ inviting me to come in for a meeting to talk about the program! My mother had made a call to the studio, and had given Michele my cell phone number in the process. I was mortified, pretty upset, and most of all terrified. I managed to ignore two or three (or maybe four...) messages from Michele until my co-worker & close friend Yvette caught wind of what was going on. She came and sat in my office in the middle of our workday and proceeded to very successfully guilt me into calling Michele back and setting up a meeting for the next day. Yvette came with me to meet with Michele, (probably because she knew if she didn't, there was no way I would go) and before I knew it I was signed up for the session of BW starting a few days later. I’m still not sure how it all happened, but I’m awfully thankful that I had someone in my corner to give me a little (or really big) push to get started! (As a side note, Yvette’s now coming to 6 studio classes a week with me at BDHQ, so she wasn’t all talk!)

How long have you struggled with weight?
I’ve struggled with weight for all of my adult life. Growing up, a number of members of my family were overweight, although it wasn’t something I was particularly conscious of. I was a fairly serious ballet dancer, and consequently never had to worry about working out or eating healthy. My family moved often, and my early teens were spent switching between countries and parents. My dancing took a backseat and I put on weight, but again, didn’t really pay too much attention. A few years later into my teens, I was in a hit-and-run accident that killed my father and left me with a number of serious injuries. It took months for me to be able to hold a pencil, so dancing was obviously a thing of the past. I was depressed but not willing to admit it, and began to put on weight rapidly. By the time I was in high school, I was well over 250lbs. I tried a number of diets with no success, mostly because I wasn’t willing to put in any kind of effort, and eventually just resigned myself to living my “new” life as an overweight person...Until this year!

What inspired you to start BWs?
Well, I already told the story about how I was not-so-gently nudged into starting...But I know that regardless of any outside influence, I had to be ready to make a change in order to actually stick with the program. I didn’t know if I was in fact ready or not, but I knew that it certainly wasn’t going to make things worse. My mom had been fighting an incredibly tough battle with breast cancer, I was working 65 or 70 hours a week, drinking a ton of coffee and a fair amount of bourbon, and smoking way too many cigarettes. I was on a pretty quick path to disaster, and knew that something needed to change. I figured the worst that would happen is that I’d waste a little bit of time & maybe I’d be a little bit sore, but at least I’d get away from my desk for a few hours a week. Little did I know...! I also remember reading this blog during one of the sleepless nights I spent worrying before I started BW and being completely amazed by your journey, Bri. There was a little part of me, right then, that started to hope that maybe, possibly, I could do it too. So, thanks for that!

What keeps you coming back?
I had to think about this one, because there were so many possible answers, but the short version is I come back because I love it! I never dreamt I’d be saying that about anything that involved exercise, but it’s true. I love that my body is changing, I love feeling stronger and seeing improvements from one workout to the next, I love finally feeling like I’m making proactive choices and having some investment in my own health and well-being, and I love the people who I get to travel this path with. The support from folks in the BW program and all of the trainers at BDHQ is truly amazing, and they are often a big part of the reason I can convince myself to get out of bed for those 6am sessions! I’m constantly inspired by the people that I workout alongside who are working so hard to change their lives, and I’m always motivated by the trainers who are working just as hard to help us make that change. The generosity of time, knowledge, encouragement, and compassion from everyone involved is absolutely incredible.

What is the hardest part?
The hardest part for me is the “head” stuff. I know how to eat healthy & I know how to work-out. It’s certainly not easy to do those two things by any stretch, but it’s also not rocket science. It’s the mental & emotional work that needs to happen in conjunction that makes me want to flee quickly in the other direction! I’m not the most “touchy-feely” person in the world, and most of the time I’d rather listen than share my own thoughts or feelings. I spent many years working as a social worker, and got really excellent at talking about other people’s emotions without ever having to go near my own. I’m finally beginning to realize that, in addition to all of my hard work in the gym & in the kitchen, I’m going to have to do the hard work in my own head to succeed in the long run. I’ll admit that the thought of that still quite seriously terrifies me, and I can think of about 1,000 reasons not to do it in any given moment. I’ve got a long way to go, but it is one of my goals for the next session to at least start thinking about it (if I don’t chicken out...)
Molly, I can totally relate to this, you are absolutely right the head stuff is HARD, and it is one of the hardest things for me still as well. Just know that you will make those changes slowly and before you know it you will be an entirely different person both inside and out.

If you could go back in time and talk to yourself before this process what would you say?
I’d tell myself that it’s not too late! It is possible, and it’s worth the work. Or, maybe more importantly, I’m worth the work. I spent a lot of years not caring; about myself, about my health, about anything in general, really. I was numb, and I was focused on surviving...or so I thought, at the time. I’ve realized now that I was just self-destructing in a painfully slow way. It breaks my heart to look back at all of the years I wasted, but I’m also incredibly thankful that I’ve started to figure it out now, instead of 20 years from now or too late altogether! I’d tell myself that reaching out is the best thing I could do, finding support & getting uncomfortable, as unimaginably hard as it may seem at first, will actually make things exponentially better. I’d tell myself that it’s a long process, and that it’s hard process, but that it’s so much easier in so many ways too. Easier to walk down the street with friends, easier to get out of bed in the morning, easier to chase after kids, easier to just be alive! And I’d tell myself again, as many times as it took, that it’s worth it.

Molly you are wise and you GET IT. I can see that you know this is a journey and you will conquer this battle. Thank you so much for being so open and honest. Don't think of the years you wasted, they make up who you are and they are creating this journey you are on now. The most important thing is you are choosing to make this change and are committed to it, keep up all the amazing work and keep inspiring us all.
Email Post