The biggest thing for me in staying accountable to this journey is sharing it with other people who know exactly what i'm going through. Each has their own struggles, their own accomplishments and their own path to follow but it is so much more enjoyable when you can share that with others. Today I had the pleasure of sitting down with Lisa to talk about her journey. Lisa has been a part of the Biggest Winners since April 2011 and has always struck me as a confident and proud woman so I was excited to hear what she had to say about what her story was.

Here is Lisa before... 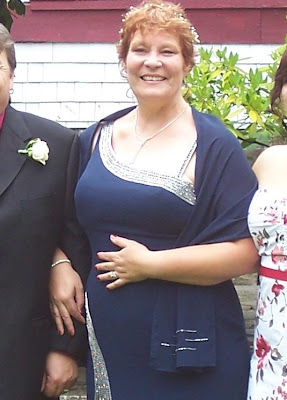 Lisa shared with me that weight and body image has always been an issue in her life, even as a young child. Looking back she now realizes that she wasn't really fat at all, she was healthy. Influenced by her mothers poor body image Lisa was put on numerous diets all which created a negative body image of herself. Something that to this day is a struggle for Lisa, as it is for most people who struggle with weight. I asked her she does with managing the body image? How does she change the mental tape? Lisa says her secret is focusing on things that are tangible. The number on the scale isn't necessarily tangible but she can see and feel a difference in her workouts and feel herself getting stronger. This allows her to become more and more self assured of her progress.

Lisa and her husband Stuart are currently both members of the Biggest Winners. I asked Lisa how it has been doing this together with Stuart? Do you keep each other on track? Or is it a downfall? She confessed that she has yo-yo dieted her whole life. She joined Weight Watchers by the age of 27 and lost 70 lbs but ended up gaining it all back. She then re-joined Weight Watchers with Stuart and again was successful and again gained it all back. This time she is trying again. The difference with this time is that she feels this is a truly sustainable way of living and losing weight and is confident that she will be successful and conquer the yo-yo dieting pattern. I asked her how she plans on making this the last time she loses the weight? Lisa said that the difference between this time and the previous times is that she is doing something that is sustainable, she is teaching herself how to eat healthy and maintain her lifestyle through exercise. With Weight Watchers she never changed the types of food she ate, she just ate less of them, now she is eating healthy and exercising - doing it the right way, the sustainable way.

A benefit of going through this journey with your spouse is that you can keep each other accountable, but there is also a pitfall to that... you are far more likely to enable your spouse to make excuses than you are a friend....for example, Id have less guilt about cancelling a 5AM workout with my husband and stay in bed then I would be to cancel that same workout with a friend. From what I can see though Stuart and Lisa seem to keep each other accountable. The biggest way they make this work is that they recognize each has their own process and journey to go through. Lisa said to me that the hardest thing for her was when she first joined Biggest Winners and Stuart was not participating, she was forced to go outside of her comfort zone and do it alone. She was forced to unhook herself from always doing it with her spouse but in the end this has made her stronger. I asked her how she did this? How do you go from being emotionally dependent on needing to do it with another person to finding the strength to do it on your own? Lisa shared that prior to joining Biggest Winners she had struggled with depression triggered by the sudden death of a close friend, and was told by her doctor that she may need to go on anti-depressants, this was not something she wanted to do. This coupled with recent open heart surgery was a huge wake up call for Lisa. After doing some research, she discovered that she could possibly avoid going on medication by trying exercise. This got her into the gym, combined with the realization that she was given this gift of life through open heart surgery and she could not waste it.

Lisa inspires me every day I go to the gym to continue on. She has also struggled with a knee injury, which required recent surgery. I was curious how she has managed to overcome all of this and keep going given that I haven't done so well at it lately. Lisa said the injury happened about five years ago at work but she never took care of it because the need was never there. Once she started exercising she realized it had to be dealt with. When it initially happened back in April she was crushed, she had just got her mental focus back, she had made the decision to do this for herself, and then wham, injury. What amazes me the most is that she kept on going, only two workouts in she could have easily given up but she didn't, and now nine months later she's still here. Lisa said the first thing she had to do was to tell herself STOP, stop the negative self talk, she put up a mental image of a stop sign and reminded herself that she could overcome this. Lisa said initially she felt like an outsider in the group, she was new, and couldn't keep up but she forced herself to keep coming. Part of it was also forcing herself to open up to others in the group and get to know people which isn't easy. When she started building friendships and relationships and seeing herself getting stronger in other ways, that kept her going. Thank you Lisa for not giving up - you show us all that it is possible to work through an injury.

Look at her now...happy, confident and STRONG! 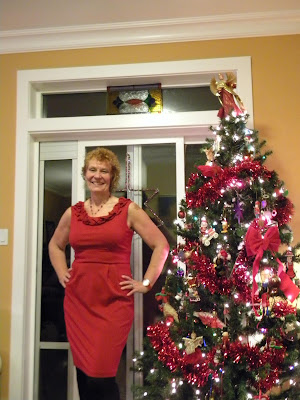 In summary here is what Lisa has to say about the Biggest Winners program and how it has helped her.

"In March of 2011 my husband commented to me on a link he had seen on a friend’s Facebook page referencing the Biggest Winner program. I was intrigued and thought I’d look into it myself. My weight had yo-yo’d over the past twenty years, but as soon as I’d lose it the weight would creep back on. More than this, though, my health was significantly impacted by my chronic lack of exercise and unhealthy lifestyle. Even serious heart issues had not been enough to jolt me into action. But by March, 2011 I had finally reached a tipping point, and the Biggest Winner program seemed the first program I could feel safe enough to venture into. I met with Michele and Lovisa of BDHQ, and they were welcoming but also matter-of-fact. Funnily enough, it was this matter-of-factness that was most comforting, because it implied that my extreme lack of knowledge and poor fitness level were not barriers to the program. And they weren’t. I never felt stupid or that I stood out in the group. Everyone took me under their wing, and would pass along helpful hints as I navigated the new and unknown world of exercise. My confidence grew as my abilities changed. I began to go for hikes, or ride a bike, or kayak – things I had never done before or ever dreamed I would WANT to do – and the BWs were there for that too, arranging outings in their own time and welcoming all who wished to attend. More than fifty pounds later I am nearer to my goal weight, but have achieved much more than that. I have strength, stamina, lower cholesterol and blood pressure. I sleep better, eat healthier, and enjoy my life so much more than I had been for years. I am so glad I found the Biggest Winners program, as it gave me the entry point into this new world, something I doubt I ever would have been brave enough to do alone. I feel the trainers really care about me and are willing to go out of their way to help me in this process. Thank you, BDHQ!"

WAY TO GO LISA - WE ARE ALL SO PROUD OF YOU